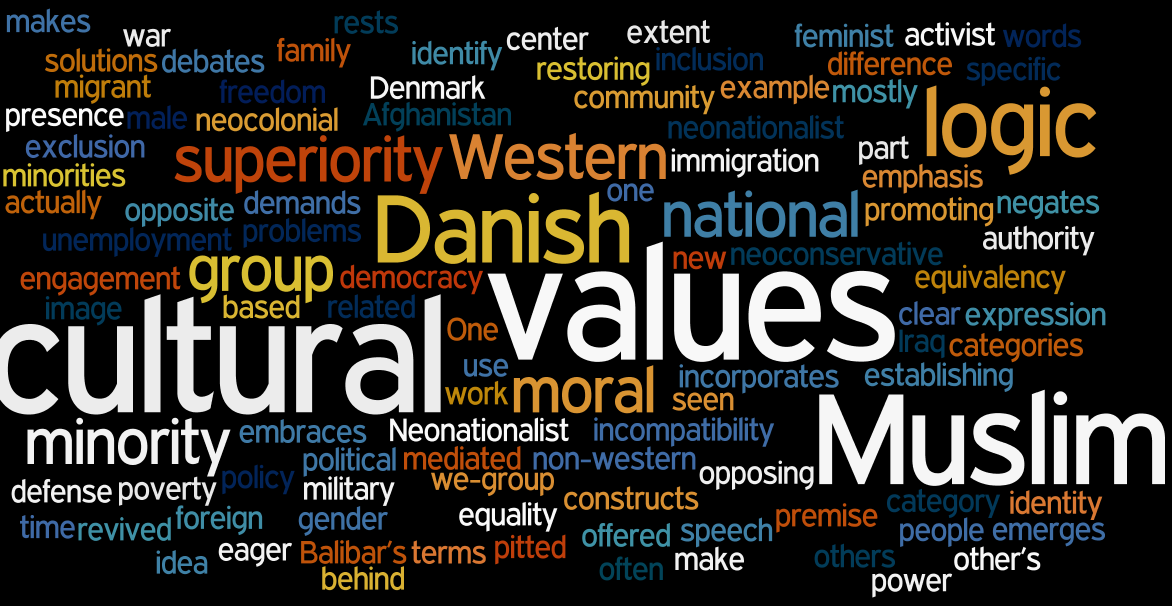 The Muhammad Cartoon Crisis was not the outcome of statements or actions of angry, threatening Muslims, but is best seen as the direct outcome of neo-conservative values and the “cultural war of values?” In the chapter on the “Cultural War of Values: The Proliferation of Moral Identities in the Danish Public Sphere”, I show with reference to editor-in-chief of Jyllands-Posten and the general historization of the War of values idea of how the publication of the cartoons was the predictable outcome of this war. We new something would happen. We didn’t know what form it would take.

The cultural war of values incorporates a neonationalist defense of Danish “cultural values” such as democracy and freedom of speech, which are actually not specific to Denmark. The solutions offered to problems related to immigration, migrant presence, poverty, unemployment, and feminist demands for gender equality often center on restoring authority based on family values, national values, and (to some extent) male power (Hervik 2012b). The emphasis on values, cultural difference, and incompatibility can be seen as a new moral logic of exclusion and inclusion: one that constructs a national, or “Western,” community pitted against a minority of non-western mostly Muslim minorities. In Balibar’s words, the logic behind the use of these categories in the mediated political debates is that a “we-group” emerges by promoting itself through its opposite, which it negates. This group does its identity work by opposing the “cultural other,” or establishing “itself as the other’s other” (Balibar 2005). On their part, these Muslim minority others make up a category of people (not a group), who do not identify with this image (Hervik 2002). One expression of this is the eager military engagement in Iraq and Afghanistan. Such activist foreign policy rests on the neoconservative premise that there can be no moral equivalency. The example makes clear that the logic that embraces the neocolonial idea of Western superiority is revived (Huntington 1993, 1996), this time in terms of “cultural superiority” (Blaut 1992, Hannerz 1999).

Yet, building the nation’s psychological bonding through aggressive policy making, confrontational media coverage, military presence in Muslim countries, and framed within a classic populist scenario of elite pitted against ordinary folks is not exclusively a neoracist matter, even though it builds on a hierarchization or inferiorization of Muslim others, which is used to control and deny their presence. Instead, the moral identities proliferating in the Danish public sphere are fundamentally anti-politically correct, antimulticulturalist, and anti-Marxist as confrontation is also directed at political adversaries using the same fighting spirit rhetoric as used when talking about Muslim minorities. The social construction of thick minority identities can only be understood in relation to the cultural war of value strategy aimed at domestic political opponents.